When the Romans came to this area, they built one of their main roads north up Nithsdale via Dalswinton and Durisdeer. Various forts and encampments have turned up.

Dalswinton had a Roman fort by the Nith, housing two cavalry units and was the HQ for South West Scotland. Durisdeer had a small fort, well worth a walk up the pass from the village.

Exciting finds of Roman settlements have been discovered only in the past few years. A Roman site at Carronbridge was partly excavated in 1989/90 in advance of the Carronbridge bypass. Drumlanrig has a superb Roman site found in 1984, which is featured in the exhibition in the visitors’ centre. Barburgh Mill, just north of Auldgirth, was an outpost of the fort at Drumlanrig with some 80 men

The first Roman soldier set foot in the glen soon after 78 AD. Agricola led the invasion and colonisation of this area in the campaign of 82 AD based at Dalswinton, but after 98 AD the Romans left.

It was not until after Hadrian’s Wall, started in 122 AD and especially the Antonine Wall, started 142 AD, that the Romans really dominated the area for a while, when they had a large camp at Drumlanrig and smaller ones at Durisdeer and Barburgh Mill.

Even after 142 under Lollius Urbicus the Romans never had a complete grip, though they may have organised farming and marketing. They would have met the mixture of local resistance and cooperation typical of occupied countries.

Circa 210 Severus led the final campaign into these parts, but in about 211 the Romans withdrew to Hadrian’s Wall. They then seemed to run this area from a distance instead of keeping permanent garrisons in the region. Thus their influence continued despite the shortness of the 70 years of semi-occupation.

Revolts against the Romans were irregular but there were several in the 360s, when inroads were made into Roman Britain. The Romans fought back and had restored order by 367. By 409 “barbarians” like the Picts and Scots were successfully attacking the Empire from all sides and most of Rome’s soldiers left Britain in that year, though they were gone locally by about 380.

There is no actual evidence of Romans in Tynron Glen, though Wilson states the finds of “Roman” urns and delineates a “Roman” road following sod dykes and sheep tracks up Tynron Glen. This “Roman” road is mentioned in Chalmer’s Caledonia (Volume V p236-7) and other sources. If it was heading up the glen it is rather a puzzle as to why the Romans would have wanted to go up the glen into what is still a virtually uninhabited area, although there is a verified Roman pony patrol track going up the shoulder of Colt Hill into the upper Ken valley.

Drumlanrig’s soldiers must have trodden Tynron Glen, at least on their way over the Clone to Glencairn, where, excitingly, a possible fortlet was discovered by aerial photography by Cairn Water at Kirkland in 1989.

Tynron Doon is the glen’s outstanding historical and physical landmark. 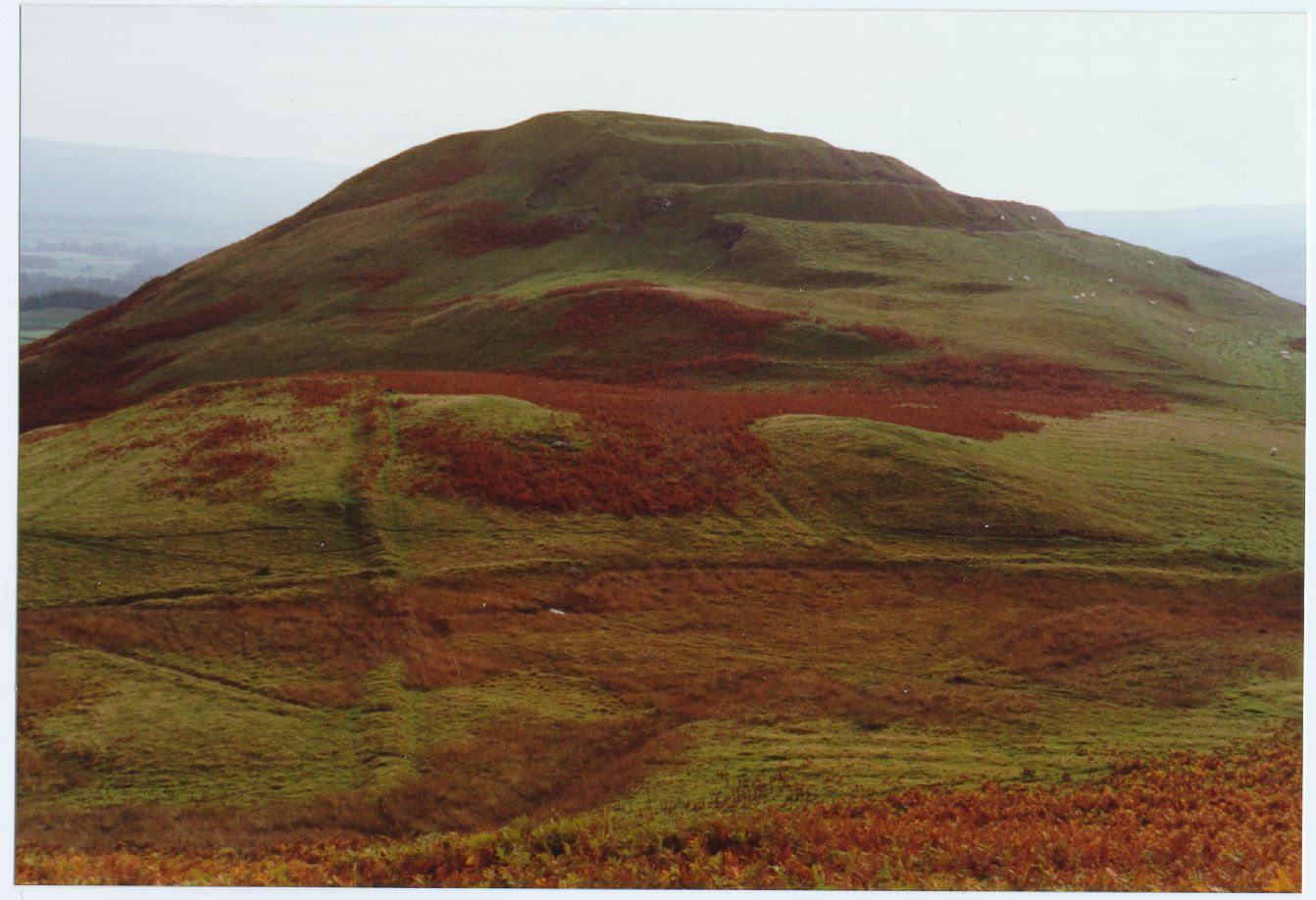 Tynron Doon from the north-west, showing the 2 ramparts and three ditches. In the left foreground two sod dykes cross at right angles

Tynron Doon is a multivallate Iron Age hill fort, typical of hundreds in Scotland, but there can scarcely be one more spectacularly situated. It consists of a sizeable circular central platform defended to the north, east and south by steep natural slopes. The west and south-west approaches are defended by two main ramparts and three ditches and the north-east slope has a later prominent terrace or courtyard.

The 1964-7 excavations found lots of animal bones and bits of iron. The bones were mainly of ox, with just a scatter of pig and sheep and possibly horse and deer. Small finds were of blue glass, bone pins, an awl, a lead weight and pieces of flint or chert, now kept in Dumfries Museum.

The scree below the hilltop contains much interesting archaeological material, including slag, this being where Willie Wilson found a seventh century gold filigree bracteate (a thin beaten plate). Trees now make access to the scree difficult.

The concept of multiple ramparts and ditches probably replaced an earlier structure of small ditches and wooden palisades, which existed maybe as early as 300 BC. The Doon was occupied and improved during the Roman occupation and is a brilliant defensive site with a marvellous outlook towards the Roman sites at Durisdeer, Carronbridge and Drumlanrig.

The ramparts are still impressive, but it is known that such fortifications deteriorate rapidly with time due to soil creep and other mass movements. This means that the Doon must have been even more impregnable when it was in use, especially with a stone wall or wooden palisade along the top.

Tynron Doon may have been a refuge from the Romans looking for slaves or it may have served as a settlement site for people tilling adjacent land and keeping herds in local pastures and forests. The view from the top in 200 BC was mostly of forest.

Tynron Doon is assumed to be still in use in the centuries after the Romans left. It has been suggested that it may have been reused as a motte under Norman influence and the ditches recut. Its continual use as a signalling post is well-known, notably during the Border raids.

The hill must have looked different in the sixteenth century, when an L-shaped tower house was built just within the gate in the north-west corner. It was about 6 metres x 13 metres with a 2.5 metres x 3 metres extension in the north-west corner. This was demolished between 1700 and 1750 and the stone was unfortunately used to rebuild the parish kirk at Tynron. The foundations of this building were still visible a hundred years ago. (The Dumfriesshire OS place names book of 1848-1858 states that the farmer removed seventy cartloads of hewn stone from the top of Tynron Doon six years ago!).

The excavations, detailed in the TDGNHAS 1964 and 1971, found the latest settlement on the Doon to be a hut circle in the south-east corner of the platform, the remains of a shepherd’s bothy after the removal of the tower.

There are other less well-known hill forts in the glen, according to Wilson anyway, who imagines earthworks on Craigturra and Killiewarren Hill, which he sees as old fortifications. I cannot agree. An impressive sod dyke crosses Killiewarren Hill and a less prominent one traverses Craigturra, but surely the Britons would have had enough to do to maintain the one fort on Tynron Doon?

There may have been a hill fort, though, on Shancastle Doon, which has a dominant view up Tynron Glen and up and down Glencairn. If you climb Shancastle you will have a wonderful view over towards Tynron Doon, but you will see no real evidence that there was a hill fort.

Grennan hill fort lies in Scaur Glen 1200 metres to the north-north-west of Tynron Doon at 825950, but it is tiny. On my last visit in September 1995, the dreaded forestry fence was being driven into its ramparts.