A walk to the top of any one of the glen’s highest hills reveals a landscape of rounded whaleback hills, which all seem to be of much the same height, with smooth convex ridges and a gently undulating skyline. A great distance can be seen. Valleys like Tynron Glen have been cut into the rocks, making the dissected plateau of the Southern Uplands.

A surprising point is that the scenery bears little or no relation to the underlying geology. Were it dependent on geology you would expect ridges running north-east to south-west, with valleys between, along the faults and weaker rocks. The Shinnel, flowing south-eastwards for much of its length, cuts completely at right angles across the rocks. This is what discordance is.

The two theories for this discordance are as follows:

As there is no evidence of any Cretaceous rocks nor Tertiary marine deposits in the region, neither theory is very attractive. 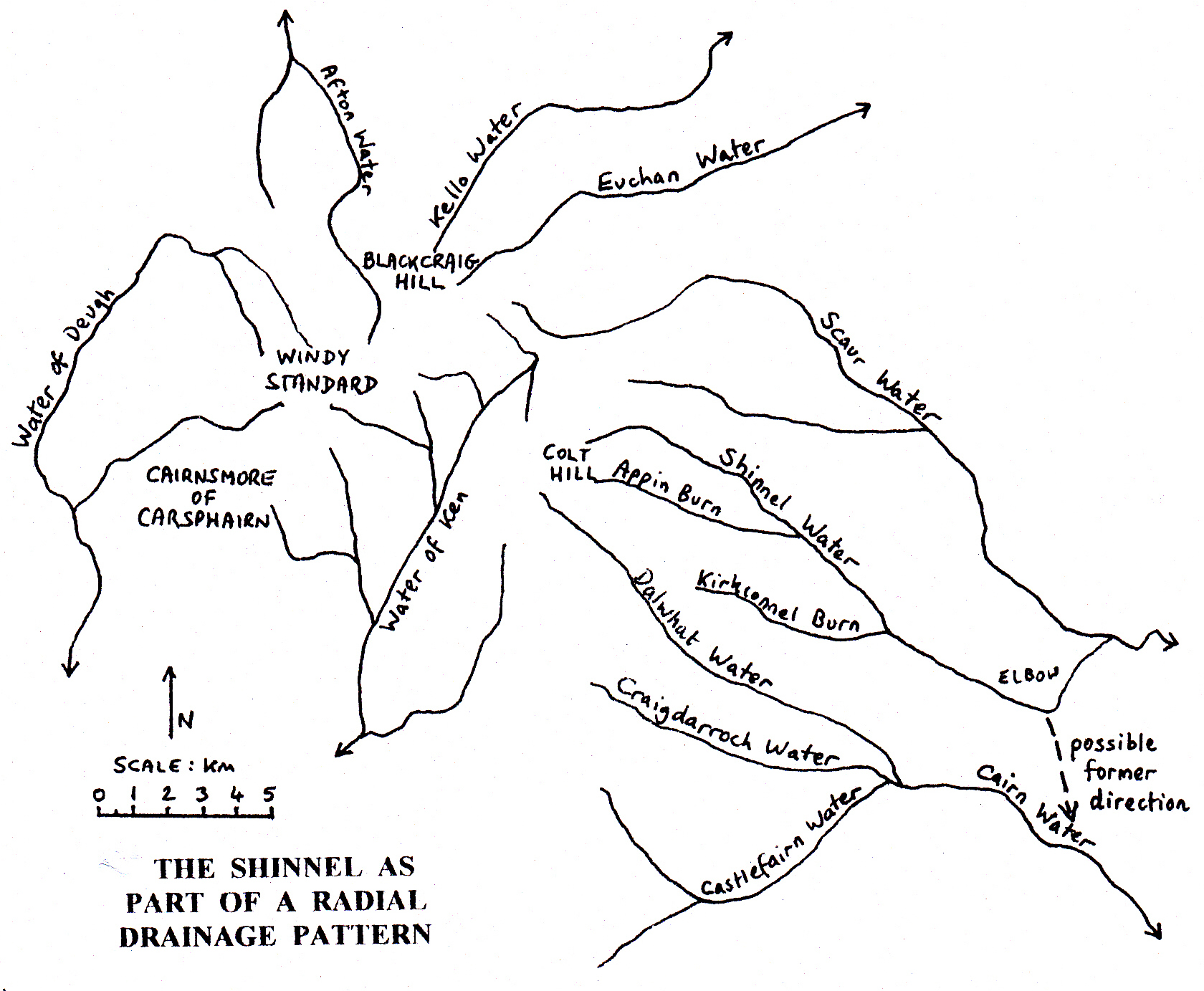 This map shows the Shinnel, the Scaur and the Dalwhat to be parts of a radial drainage pattern centred around Cairnsmore of Carsphairn, Blackcraig Hill and Windy Standard just a few kilometres to the west. These three rivers drain south-eastwards into the Nith.

A sharp elbow of capture shows up on the Shinnel at the Clone and it appears that the Shinnel must have continued south-east at the Clone and flowed into the Cairn not so very long ago. The Clone pass is chock-full of glacial deposits of considerable depth and it seems that this particular course of the Shinnel was cut off in the Ice Age. The height difference between the top of the Clone and the Shinnel Water is quite considerable, however, so the blockage may have occurred several interglacials ago.

The till-filled gap followed by the road from Tynron village, past Clonrae, to Shinnel Wood is also probably a former course of the Shinnel. Now it is a wide valley with only a tiny misfit stream in it. This valley must once have contained a much larger river, i.e. the Shinnel. The height difference between Tynron bridge and Craigturra cottage is a mere 22 metres.

There is evidence of a continual drop in sea-level relative to land in recent geological history. This exists in the form of the benches or shoulders on the valley sides. A walk up any hillside in the glen shows that slope angle is very inconsistent, some parts of the same hillside being quite steep and others almost level. If sea-level did not change, then the Shinnel would have regular concave valley sides.

Each uplift of land in the Tertiary has made the Shinnel cut deeper and deeper down into the glen floor. Each bench up on the hillside is a fragment of an old bit of valley side, relating to a time when the valley floor was higher than at present. The valley-side cross-sections above Auchenbrack and Macqueston show these benches clearly and they have been well-used for farming. 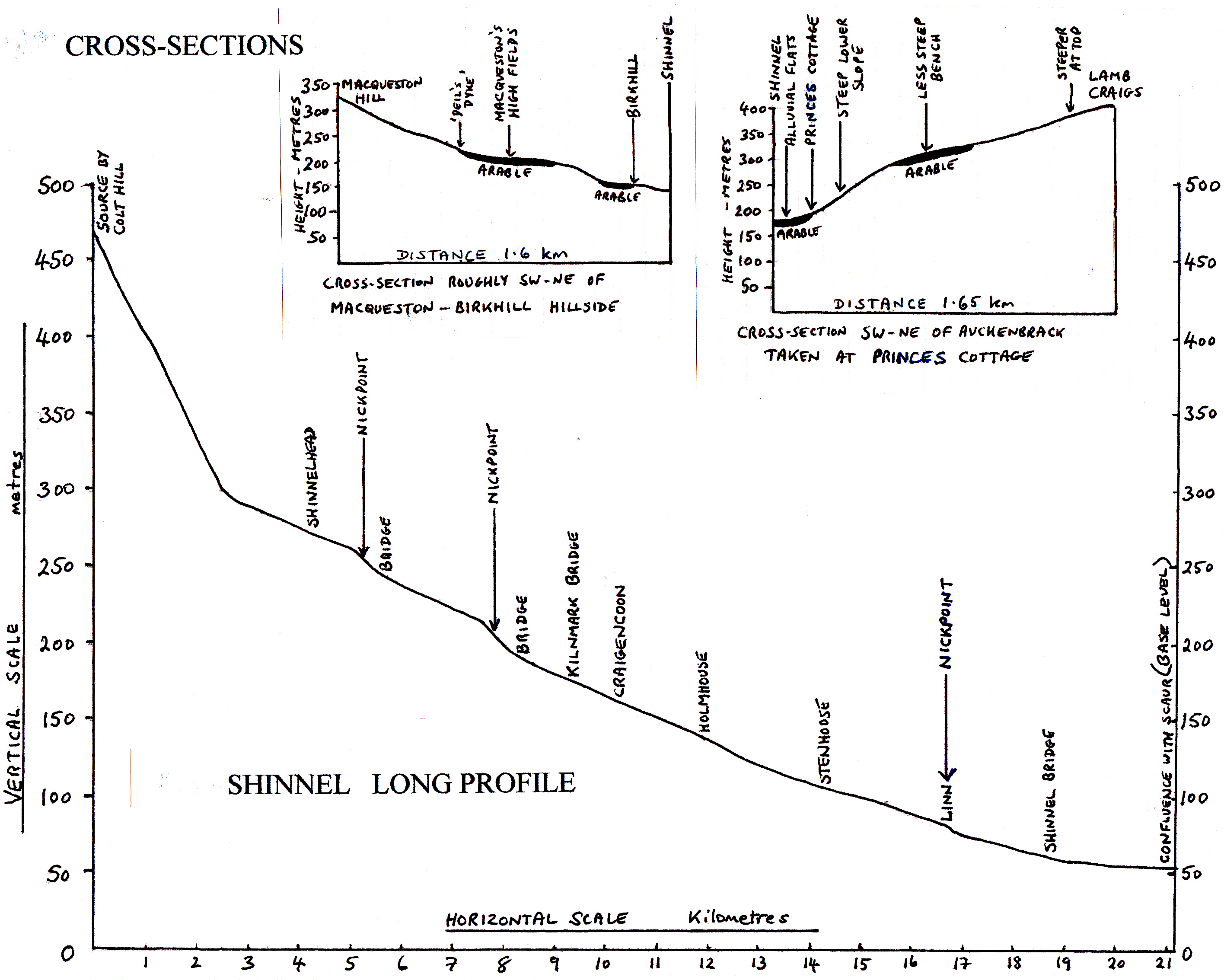 The long profile of the Shinnel shows up the changes in gradient of the glen floor. The Shinnel runs across alternate stretches of flattish alluvium with a shallow gradient and steeper sections with rapids and small waterfalls. These latter stretches are called nick points and are caused by drops in sea-level or uplifts of land.

Why are the hills smooth and rounded?

Earlier in the Tertiary, some few millions years ago, as mentioned above, this area could have been under the sea and levelled off by wave action.

When the land was uplifted out of the sea, the rivers cut their valleys and the hills were worn down by sub-aerial processes of weathering and erosion. The rocks of the Shinnel are thinly bedded and mostly break up into flat stones of no great size, not into large boulders. This could contribute to the lack of angularity in the scenery. There are some crags, but only four of any extent, Craigturra, Tynron Doon, Croglin Craig and Sharp Craig.

The rounded appearance of the hills was then accentuated during the last million years or so during the Ice Age.

A landscape of rounded whaleback hills