500 million years ago is when I choose to begin the story of Tynron Glen. At that time there was land to the north where the Highlands are now. Where Tynron is there was sea.

The earliest local rocks were laid down under this sea in the Ordovician Period (500-440 million years ago) and the Silurian Period (440-395 million years ago) in a geosyncline. This geosyncline was a huge basin under the sea for a hundred million years, into which all the sediments from further north were washed by rivers. The volume of this sediment was such that it continually sank under its own weight, thus building up enormous thicknesses of sediment.

400 million years have turned these sediments into hard sedimentary rocks. Rock types in the glen vary from fine-grained shales and mudstones to coarser greywackes and conglomerates. The typical rock of the glen is the grey featureless whinstone, the local name for the greywacke, formed of grains carried by currents a long way offshore.

Fossils are not found in the whinstone. However there are thin bands of black shales, best seen in the forestry excavations above Shinnel Head, which are fossiliferous. Black shales can easily be mistaken for coal. They consist of very dark mud with some graptolites preserved in them. Graptolites, which are colonial marine organisms, may be found by patient searching. I was obviously not patient enough.

These black shales are the oldest rocks of the area and were laid down very far from land. The black shales can be seen by following the burn in Dun Cleuch 7297, as it tumbles down the steep hillside.

Just through the forestry gate at Shinnel Head up on the left is a quarry which reveals the black shales, which are particularly favoured by the forestry people for surfacing the forestry roads. On the south side of the quarry is radiolarian chert, a rock associated with the black shales. This is a greyish rock which, when broken, gives a razor-sharp edge. It is made up of the siliceous skeletons of minute protozoa.

It is common to find conglomerates, especially up the glen. These rocks consist of coarse sand and pebbles from ancient beaches. A particularly fine place to see these is at Fairy Craig by Appin, but there are also plenty of conglomerate erratics down the glen, carried there by glaciers, notably the boulders in the field by Craigencoon cottage.

So, all these rocks were deposited in a sea lying to the south of a landmass situated where the Highlands are now. In late Silurian times, about 400 million years ago, began the Caledonian orogeny or mountain-building period, when the sediments in this basin were squeezed up by crustal movements to form a mountain range with a north-east to south-west trend. The events of these momentous times were to give the rocks their present very steep dip to the north-west. In fact, in many places, the beds lie vertical, which can be seen along stream beds or at rock outcrops.

At least 15 kilometres thickness of greywacke is present in Tynron Glen.

About 380 million years ago molten rock was forced between some of the beds of primaeval rock. Some of these rocks, porphyrite and lamprophyre, now outcrop in narrow bands as igneous dykes, crossing the glen at right angles. Such rocks solidified quite deep underground, but have been revealed by erosion. Porphyrite and lamprophyre are pink igneous rocks easily distinguished from grey whinstone when freshly broken. They make as good dykestones as the whinstones and their use in a wall is very often the sign of an outcrop.

A convenient spot to find an outcrop is 150 metres south-east of Kirkconnel Loch, where the porphyrite outcrops as a low narrow ridge crossing the track. Along this track the junction between the pink porphyrite and the whinstone can be clearly seen. In this case the country rock (the whinstone) has been baked by the intense heat of the dyke and altered to a dark slaty rock. This dyke outcrop can be followed up to the top of Thistlemark, where some of these distinct pink stones have been used in the march dyke. 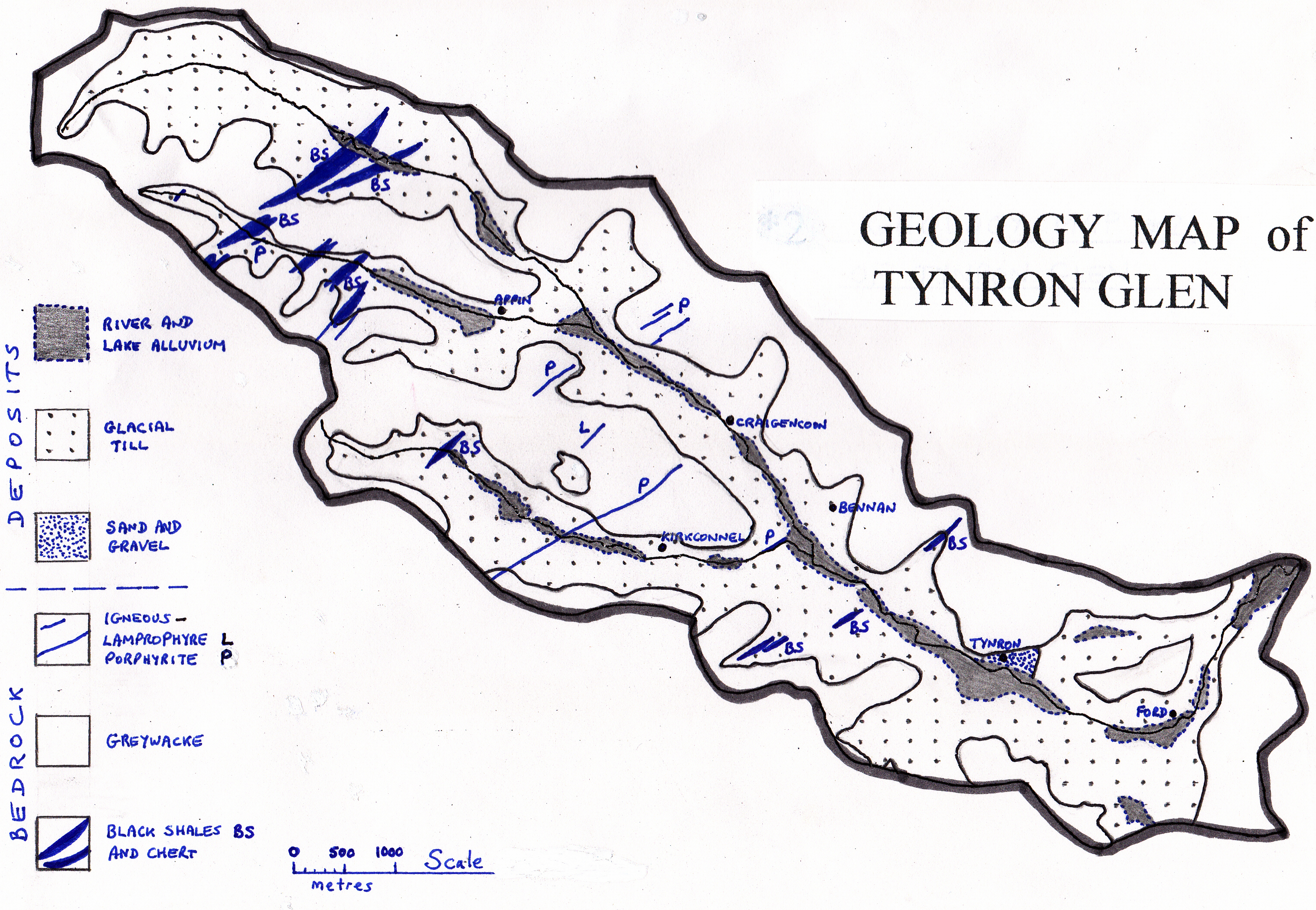 Since 380 Million Years Ago

What has happened since then is still not well understood. There are no rocks younger than Silurian in the glen. This could well be because the area has not been under the sea since then. However, the Nith Valley around Thornhill was certainly under water about 300 million years ago in mid-Carboniferous times. Maybe the whole of southern Scotland was too, though any rocks deposited then have since been eroded away.

Roughly 225 million years ago red sandstones were laid down in the sea in the Thornhill area, these being made from sand and dust washed or blown from the surrounding desert hills. So Tynron was a desert at that time.

It is amazing to think that this area could have been part of a range of mountains as high as the Alps at least three times in the last 500 million years. The hills we see now form a mere worn-down remnant of these mountains.

The whinstone has been fully utilised. It makes the dykes and the houses and is an excellent long-lasting building stone. Though it does not always split along straight lines, it does not weather like the red sandstone. Small abandoned quarries are dotted around the glen especially by roadsides. Buccleuch Estates still exploit the quarry at Aird Wood 827935. Whinstone shingle from the river makes cobbled surfaces for farmyards and forecourts and whinstone makes good roadstone for the forestry.

The red desert sandstones have been used in many buildings in the glen, especially for making the extremely attractive lintels or window edgings. The church is built of the coarsest of pink sandstones with large grains of quartz.

Lead was prospected on Stenhouse but without success. Minerals, even quartz veins, are hard to find. In Tynron parish, but in Scaur Glen, at Corfardine, slates were quarried for a short while at 804961.

The geology of Tynron Glen is described brilliantly with photos in her article “Time-Travel the Shinnel Glen with Diana Turner” in geodg.wordpress. com/publications. Tynron resident Diana adds so much more interesting detail to this rather dry section on geology.